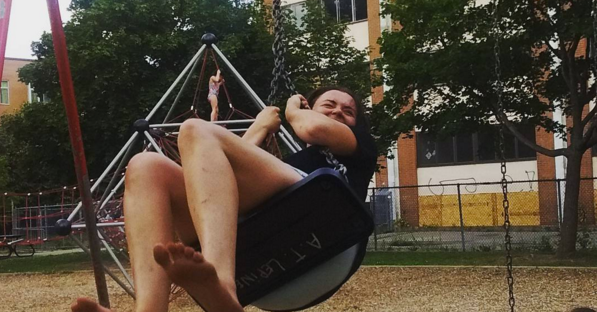 Over the past month I’ve been preparing for this summer’s day camp, meeting with Margaret to reflect and improve (bring on those portable toilets!), and have been thinking a lot about the experiences I had running the day camp program in 2015.

When we launched our forest-school inspired camp last summer, we weren’t sure if school-aged kids and their parents would be interested in an all-outdoors, child-led program. Parents had been asking us about a day camp for a while, but we wondered how well kids who were in school, used to a traditional model of education which valued academic achievement, results-based learning, tons of tests, and sitting (inside) for most of the day, would take to it. The research is loud and clear that kids need to be active, and that simply being in a natural space allows for greater learning opportunities, but nonetheless, I personally was nervous that many parents of older children wouldn’t be interested in just letting their kids “play” all day, and that some kids might even feel “bored” without a highly structured routine to guide the day.

Thankfully, I was wrong.

Our camp quickly filled up. In part with our L&M playschool families who were transitioning to kindergarten, their older siblings, but also with many families who had just heard of us or the day camp via word of mouth.

The true test, of course, was the weeks spent at camp itself. This is when I started believing 100% in the necessity to give older children continued access to natural environments, free play, and the chance to “choose their own adventure”. This child-led approach was also a valuable learning opportunity in democracy. With eight kids and one adult, not everyone agreed on what the group should do for that particular block of time, but together we talked it through, debated, and compromised. Through this process, I saw the kids come away feeling like they were active participants in our camp and that their particular goals or wishes were fulfilled.

I have many highlights from day camp – every day truly was an adventure, and I had a blast. Sometimes, I actively played with the kids and was a key participant in their games, such as “monster” at the park, “server in a restaurant” at the Champ des possibles, and “throw the babies into the pool” at Parc Laurier (to be clear, the babies were day camp kids, I did not throw actual babies into the pool!!). Other times, the kids were happier to play on their own, what I would call in Playworker terms “low intervention” playwork. I was there simply to ensure that everyone stayed safe, but they were fully absorbed in games either as a group or in smaller groups, getting lost in their imaginations as kids tend to do when given the opportunity. 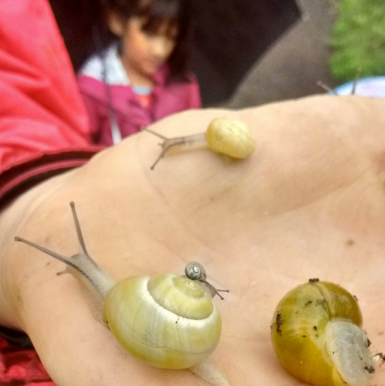 I also got to see the kids learn to calculate risks and push themselves. Some of them truly were fearless and I like to believe that me trusting them to know their own limits helped develop their self-confidence and ability to trust themselves, a valuable life skill. Others found small ways to step out of their comfort zone, whether it was by climbing trees, actually digging in the dirt and touching mud, letting snails and other small creatures climb on them, or simply just learning to embrace the rain.

One of my favourite, and consequently messiest, days at camp was a day where it poured rain almost all day. Two older boys really helped me get the kids enthusiastic about embracing the weather. We built a large shelter under a picnic table in the morning. We were only there for a few minutes before one of the girls decided we should have a massive dance party in the rain. We ate our lunch under a lean-to we’d built, sang songs and told stories as we waited for the rain to pass. When it didn’t, we played in the dirt and mud instead. Most of the kids literally swam fully-clothed in the large mud puddles. Seeing the sheer joy on their faces was confirmation that we were doing something right.

This post would not be complete if I didn’t mention the “twisted sister” – a day camp signature move on the swings and what I consider to be the true embodiment of day camp life. Invented by a couple of the campers, the twisted sister involves first twisting the swing and THEN giving a full underduck/underdog. The twisted sister “ultimate” is the same, but you do the HIGHEST UNDERDUCK POSSIBLE so it’s super high and super fast, and you twist the swing around tighter. Some of the parents at the park looked a bit skeptical, but we always ensured kids were ready for this ultimate swing move and only went as high as they were prepared for! I even tested it out myself! It was a lot of fun!

I highlight this as an example because I think it shows the kinds of things that can happen when you give kids agency to choose how they play and listen to the limits they create for themselves. To be clear, there were no accidents as a result of this wild swing move – we did have one broken arm over the summer, but it was due to sliding down a baby slide at the park, not from any of the risky play scenarios we put ourselves in! Go figure ☺

I could go on forever about the joys I, and the campers, experienced while at day camp, our construction feats, weekly trips to the woods at Beaver Lake and never-ending performances and talent shows. By the end of the summer, I couldn’t help thinking what a shame it was that child-led and play-based programs are offered primarily to preschool-aged children, when I would argue that school-aged children need opportunities for unstructured play and outdoor education just as much if not more. Older kids have the ability to take their explorations that much farther. They are physically able to climb higher, and can take on and execute complex projects, like the mini 3-D toilets complete with flushable handles and figurines to use them some of our campers made last summer.

After my experiences last summer, I know that I for one will be an active advocate for providing older children with play opportunities, and I hope that more schools and community organizations hop on board. In the meantime, I’ll be counting down the days until I can be back with my crew of 5-8 year olds, hanging out in the Marché and Champ, getting (extremely) dirty and passing my days singing, dancing, digging, painting, and, most importantly, PLAYING!