After a gloriously mild fall, winter came in with a bang on Sunday night with a big dump of snow and temperatures below zero all week. Many grumbled, but many rejoiced. I fell strongly into the latter category. Last winter it rained A LOT and while the mud kitchens were fun, being outside in the freezing rain was tough. Cold, rainy days means winter gear gets soaked through pretty much instantly.

My general love of snow and the memories of how many mittens I went through every day last winter made me RIDICULOUSLY EXCITED for the snow fall this week. The kids too. Yes, it is a bit colder outside, but not when we are running around, making snowballs, building snow forts, and climbing up the hills of the Mont Royal and sliding down on our bums (or the Human Toboggan, Megan). Plus, look how dreamy the Champ des Possibles is at this time of year!!

A long-time popular winter activity for kids is eating snow and icicles. This week we had snow ice cream, popsicles, soup, marshmallows, and even snow croissants. YES, I know that snow and icicles are dirty and germy. I make sure kids only eat clean snow, so freshly fallen, and of course without any tracks or any sign of life around it, and no icicles off parked cars (they try – and I’ll admit I ate my fair share of car exhaust popsicles as a kid). One day at Adventure Club, the kids went on a full-on icicle hunt, searching for them all over the playground. 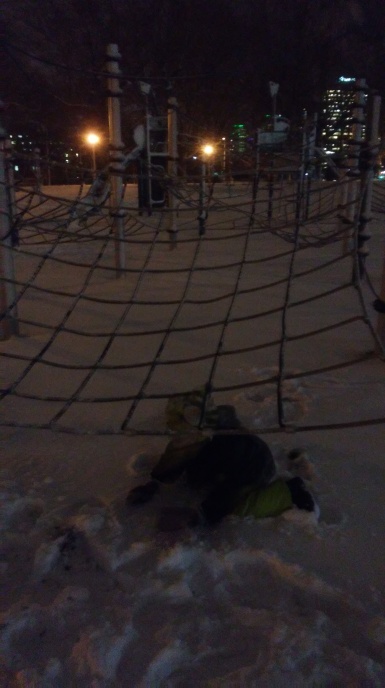 So much of spending time with children, our own or someone else’s, is emotional and heavily influenced in our own experience of childhood. When I see kids engaging in a simple act of eating snow off of a plant at the Champ, I think back to my own memories of seeking snow to eat as a child, and how much joy this brought me. Likewise for icicles. Since icicles require a pretty specific temperature shift, they aren’t around that much.

During the long Saskatchewan and Albertan winters, my classmates would always play this sort of game that would end in giving the same “advice”: “Don’t eat yellow snow”. I don’t remember the specifics, but we taught each other what was safe and what was pee-covered. No one wants to eat pee.

Kind of like play fighting, trying to stop something like eating snow is not easy – if I tell them not to do it, point blank, they will do it when I’m not looking anyways, and why they shouldn’t do it doesn’t make sense. Better to teach them what kind of snow is safe to eat and when they can eat it – IE, the fresh stuff, or at the very least, the white stuff. It brings joy, and memories around winter that will last a lifetime. Reverence for the natural world – and feeling happy and having fun – has far greater positive implications for their future health than the potential of alleged germs in freshly fallen snow.

PSST: I still eat snow sometimes. You know, for the kids, SWEAR. Parents/educators, if you haven’t done this in a while, or ever, I suggest you give it a go. It tastes good. Let’s just wait for some new flakes to fall first….
Megan